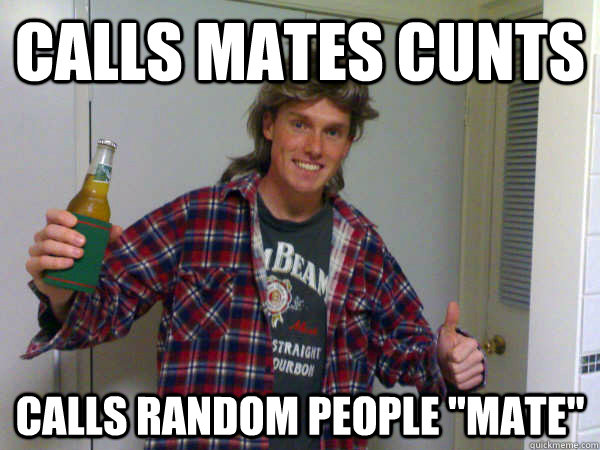 This picture is often posted on social networking sites like Facebook as a joke about how Australians talk to friends and people in the community. It makes you think why Australians call their friends offensive names yet random people in the community "mate" as in "friend". This may go back to the ANZAC spirit where people have a real bond and mate ship between them so calling a mate a rude word is not really offensive.

It can also help outsiders to think Australians are friendly when they are called "mate" which they might interperate as "friend". Although the guy in the picture makes it seem like only typical Aussie bogans do this yet lots of people from different nationalities partake in the ANZAC spirit of close mateship that seems trademark Australian.


This also helps to show the typical Aussie bogan which is a real beer drinker or supporter that has the mullet hairstyle and wears flannelette shirts. This is the typical type of bogan depicted by most people in Australian society.